After doing a few rounds to get the lay of the land (and to take some sexy pics of goings on), I picked my target. Sitting myself down near to him, I flashed plenty of leg to try to get his attention. As he looked me up and down, I fixed my gaze on his face. As we established strong eye contact, I gave him a shy smile.

He nodded his head to encourage me to join him on his couch. Game on! I shuffled over beside him. After exchanging the obligatory pleasantries, I dived in and planted a deep, passionate kiss on his lips. He enthusiastically reciprocated. 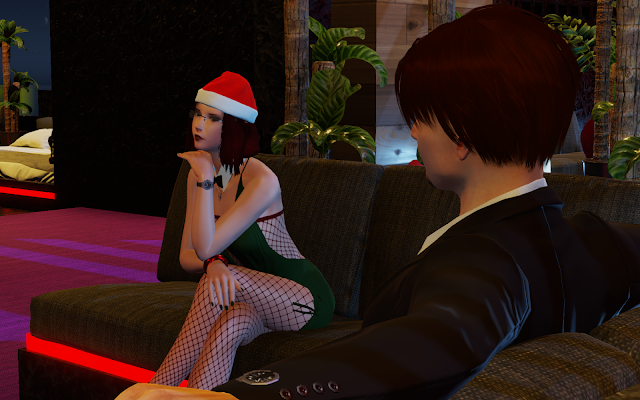 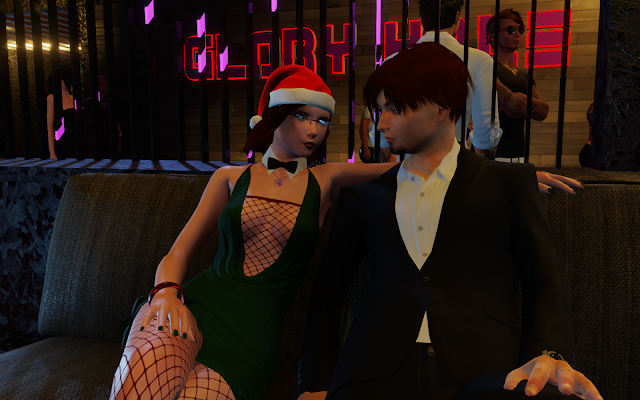 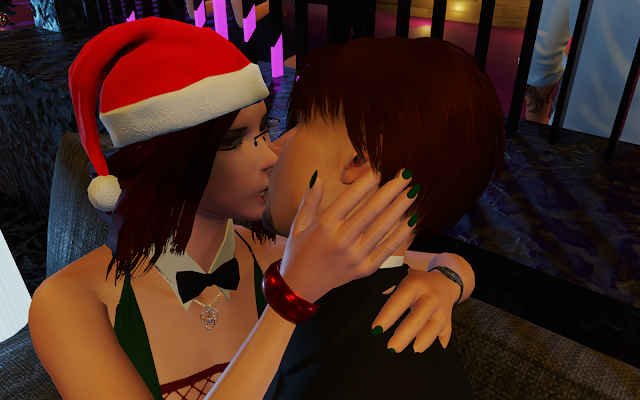 With our bodies pressed together as we made out, I could fee a slight stirring in his trousers. But only a slight one. My hand brushed across the crotch of his trousers. Barely even a semi. A bit more titillation was needed before the pants could come off.

Rising from the couch, I stepped across to the conveniently placed pole and began to twirl around it. I could see his eyes looking my sexy figure up and down as he tracked my gracefully movements. Even as two girls and a guy made themselves cosy on the neighbouring couch, his attention remained fixed on me. 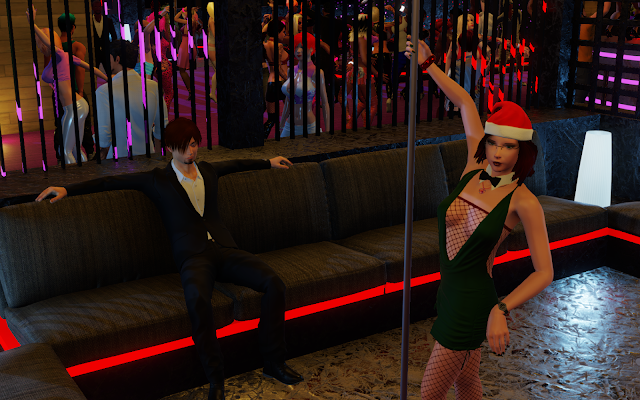 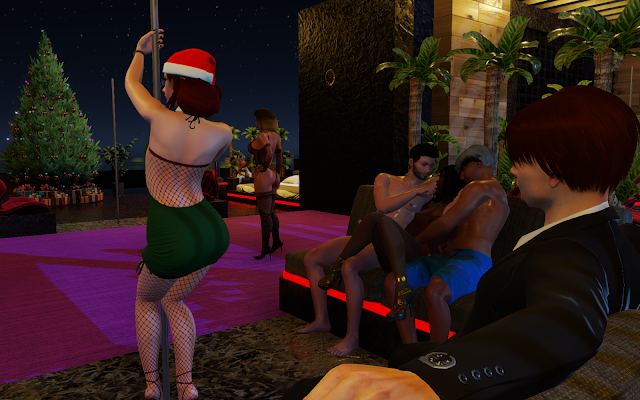 Pausing only for a moment to slip out of my dress, I continued to work the pole.

As my clothes started to come off, so did his. Even before his pants came off, a pole of his own was now very, very obvious. I was not disappointed with what I saw when his pants joined the rest of his clothes in a heap on the floor. It was a nice looking cock, for sure. My anticipation levels were rising. 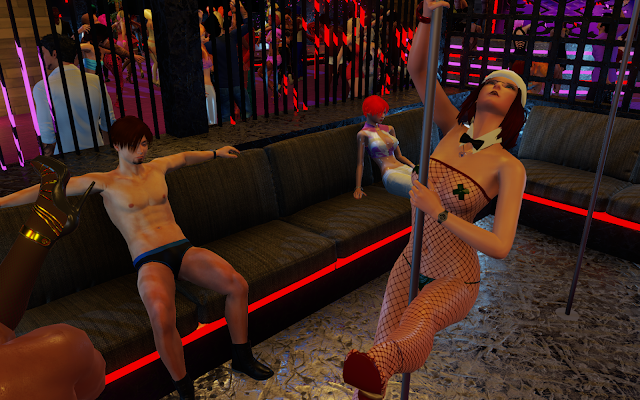 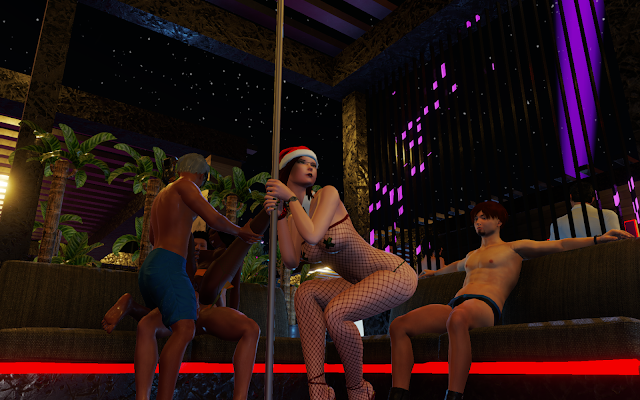 I obviously took it as a compliment that he was showing his appreciation for my body by stroking his cock up and down. But I didn't want him wasting any of his stamina by jerking himself off.

My thumbs hooked inside either side of my tiny panties. I bent over, pushing my ass up towards his face, as I slide them down to my ankles. His eyes lit up as he got a full view of both of my tight, little holes. His cock clearly stiffened even more than it already had done.

Hopping back onto the couch alongside him, I gave his cock a quick check with my hands while his hands got busy playing with my boobs. Stroking it up and down, it was absolutely rock hard and definitely ready to go. 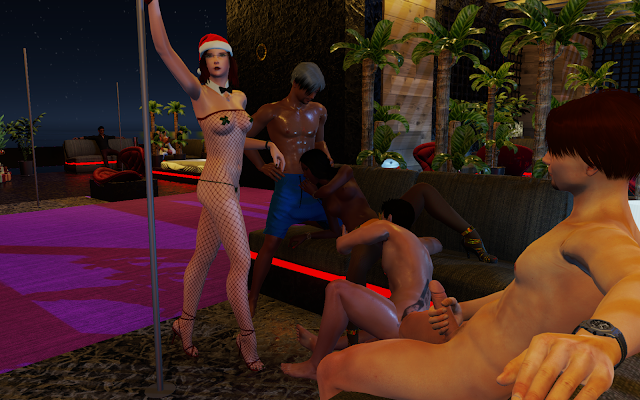 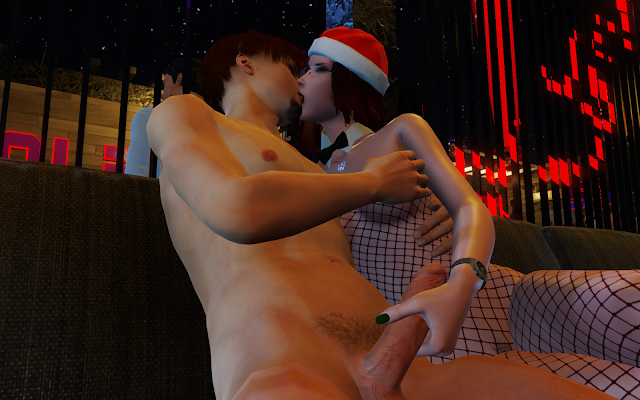 Taking advantage of all of the space available, I slide down along the couch and teased the tip of his cock with my tongue. Licking round and round the head, his groans were signs of approval.

My lips wrapped around the very tip as I continued to tease it with my tongue. It was too much for him though. A hand on the back of my head firmly pushed it down. Almost the whole length of his cock was now in my mouth. Despite having to fight the urge to gag on this hard cock, I let him use my mouth as he desired. bobbing my head up and down. 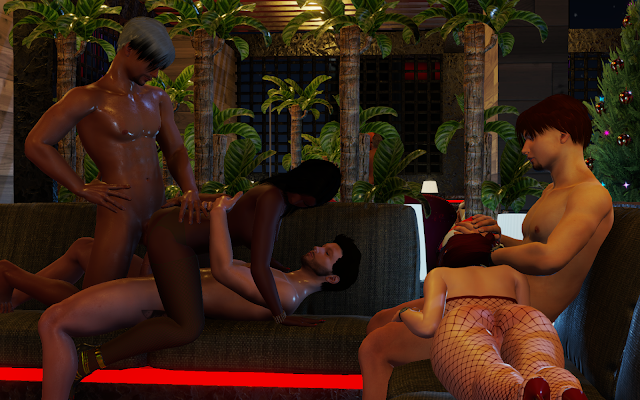 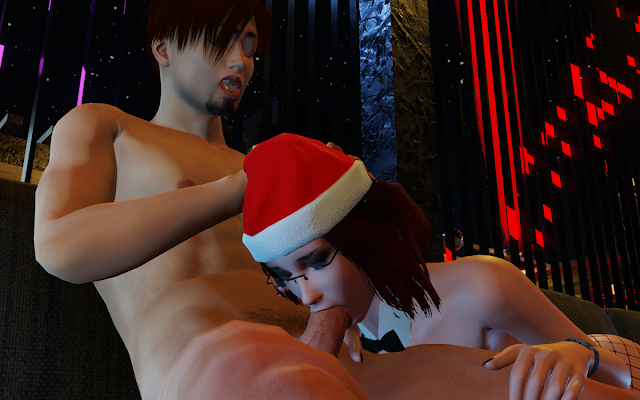 Responding to how I was letting him do what he wanted with my mouth, he flipped me over onto the couch. My head hanging over the edge, he carefully guided his cock into my mouth until his balls were pressed against my face.

It was too much for me to bear. I squirmed and wriggled but it was no good. I gagged hard. Saliva erupted from my mouth where the seal between my lips and his shaft was not tight enough.

He withdrew to just the tip but then forced it back inside. He proceeded to aggressively fuck my mouth but was always careful not to go so deep as to make me gag again. It was rough but still considerate of my well being, the way it should be.

His face fucking started to ease up He reached between my legs with both hands and ripped open the crotch of my body stocking. Manhandling me once more, he spun me round and buried his face between my legs. My eyes momentarily rolled back as he stimulated my clit with his tongue while gently working two of his fingers in and out of my pussy. 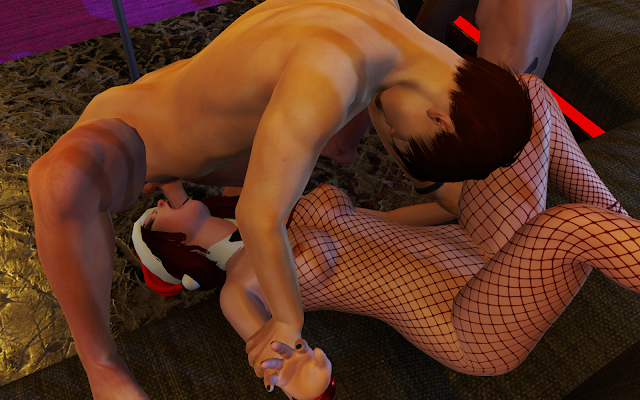 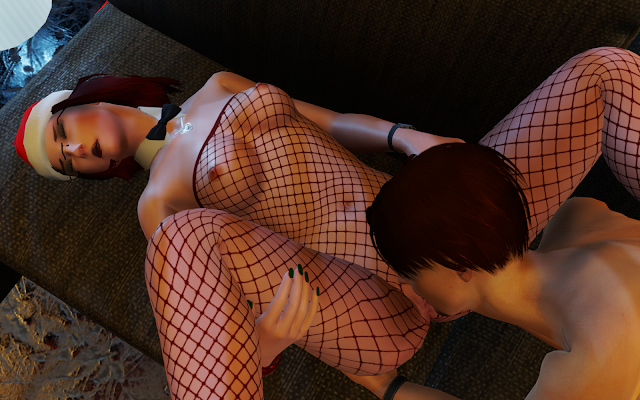 To this point, I'd be pretty submissive and just let him use me how he wanted but I was now ready to fuck. Taking control, I pushed him on his back and straddled him. He needed no invitation to suck on my tits as I dangled them in his face. As he did so, I rubbed my pussy lips against his cock.

I reached back and angled his cock down so I could sit back on it. I lowered myself down the entire length. It felt great. My hips began slowly lifting up and down. My pussy swallowed his whole cock and released all but the very tip. Again and again. Without even thinking about it, I was now fucking him hard.

Not to be outdone, he wrapped his arms around me to pull me down close to him. He then furiously started thrusting up into me. The intensity of it drove me wild. I let myself go limp on his chest as he pounded my sensitive pussy. 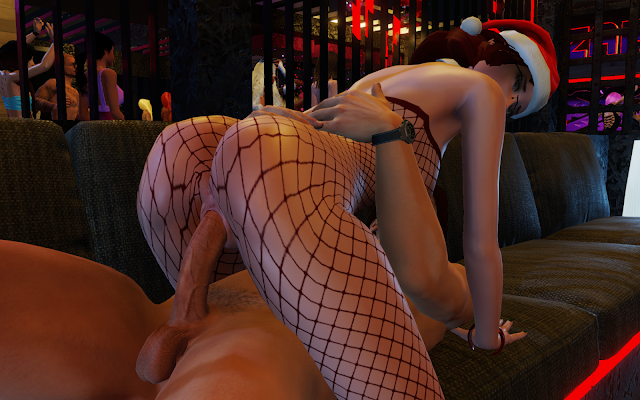 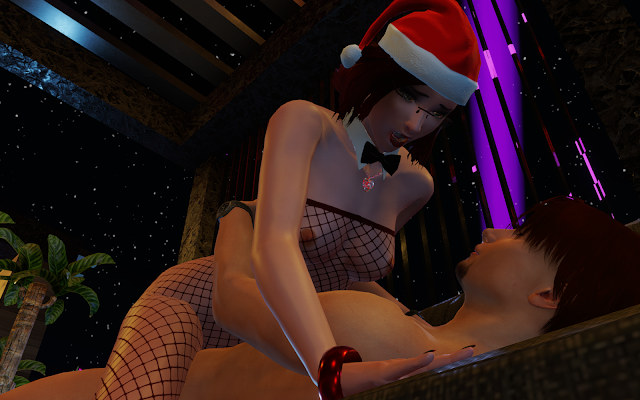 Although it felt great, his hard fucking was not as measured as it could have been. On a couple of occasions, his cock popped out of me as he withdrew it too far. These interruptions were clearly bothering us both equally.

I climbed off of him and bent myself over the back of the couch. Spreading my pussy lips with my fingers, I invited him to resume fucking me.

He dribbled a bit of saliva onto my pussy as he carefully slid his cock back inside me. As soon as he had started to penetrate inside me, he started pounding my again. I braced myself against the back of the couch as he slammed into me time and time again.

Slap! He spanked my ass hard. I demanded another. Slap!! Even harder. Slap!!! And another, even harder still. My ass had turned bright red. 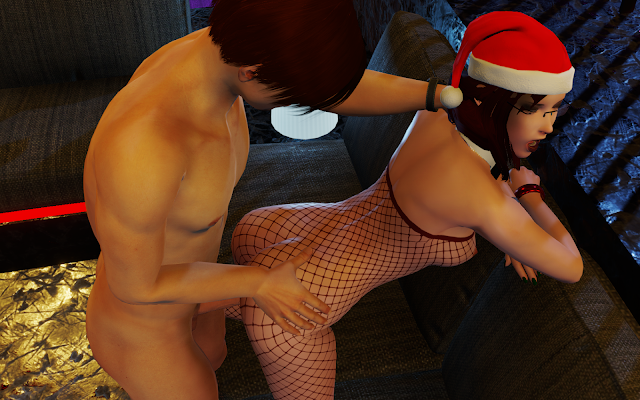 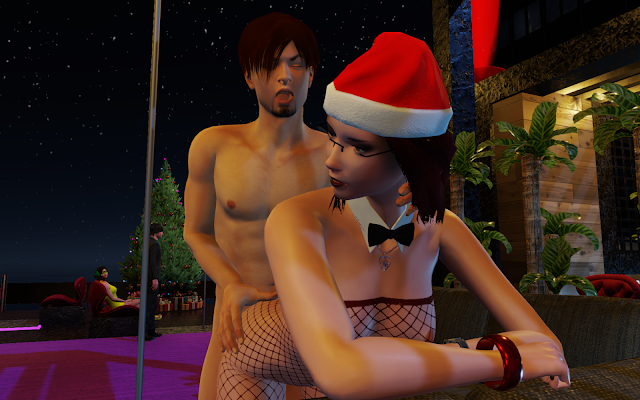 And then he went right back to pumping his cock into me. He was now also reaching round with his hand to play with my clit. I wouldn't be long until I was ready to explode. 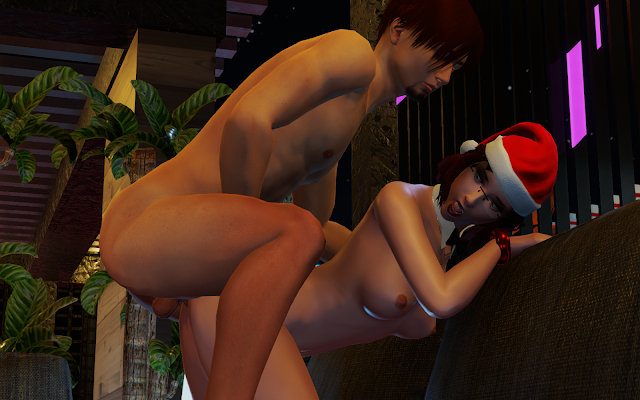 As I neared climax, he picked me up and pushed me against the pole that I had earlier been twirling around. Lifting me up so that he was supporting all of my weight, he once again buried his face between my legs.

It didn't take much more stimulation from his tongue to make my pussy become super creamy. A little squirt of cream followed by a trickle of it oozing from between my moist lips. He gleefully licked it all out of me before climbing back to his feet to re-insert his cock, still while supporting all my weight against the pole. 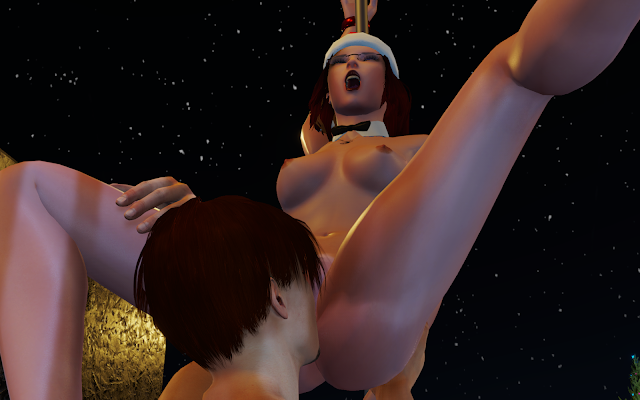 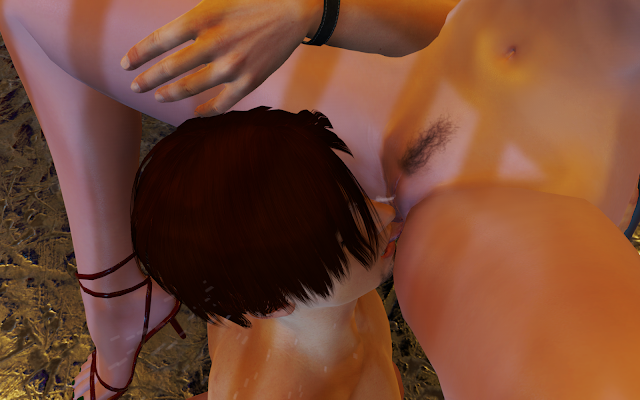 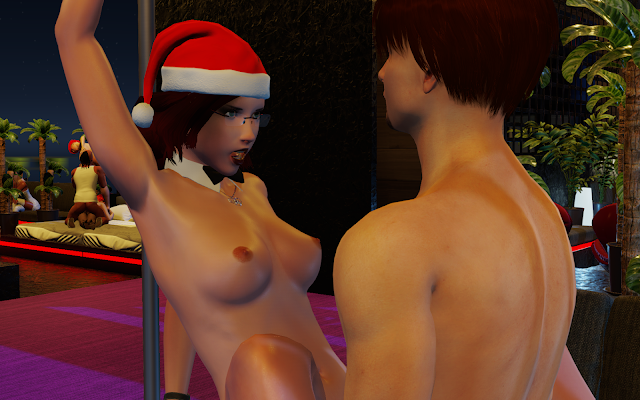 Our eyes remained locked as he delivered one long thrust after another. The pace was now much slower than it had been but no less intense.

As he too neared climax, I pushed myself away from the pole and wrapped my arms around him. As our sweaty bodies pressed together,  I motorboated him with boobs. 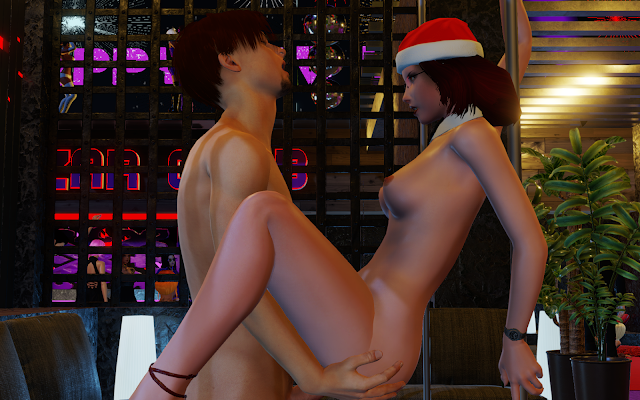 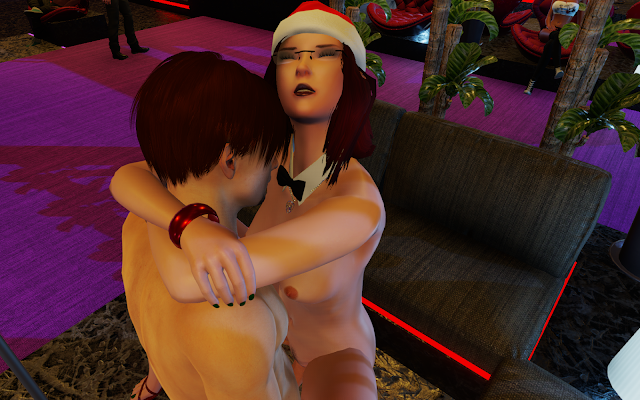 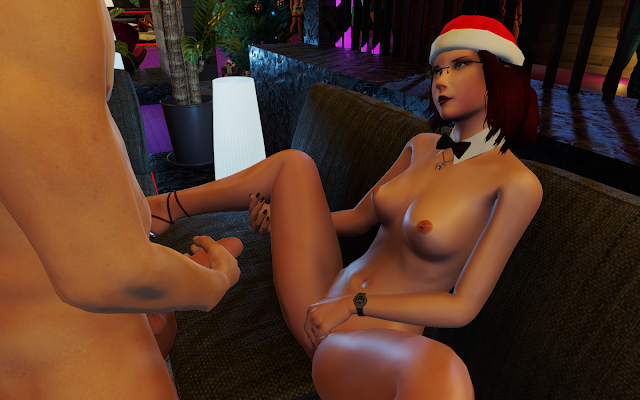 I dropped down on to the floor and wrapped my lips tightly around him. In the moment, it felt like I sucked harder than I had ever sucked a cock before. 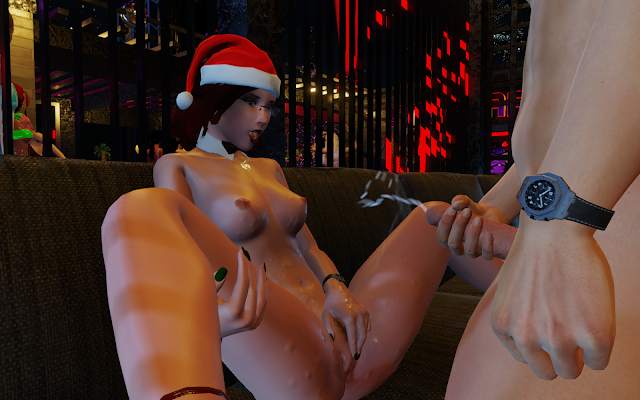 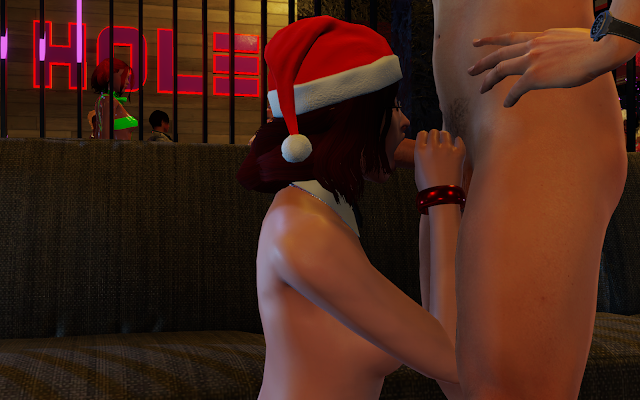 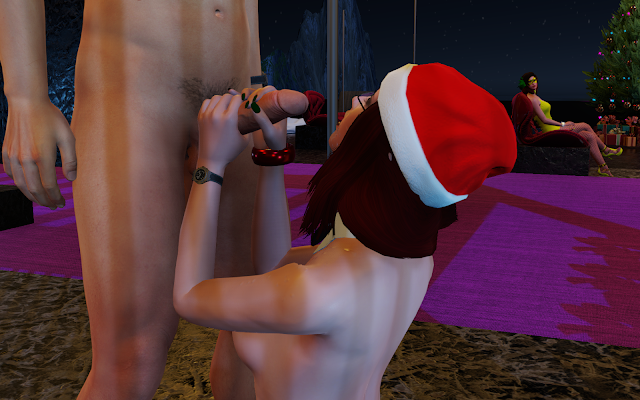 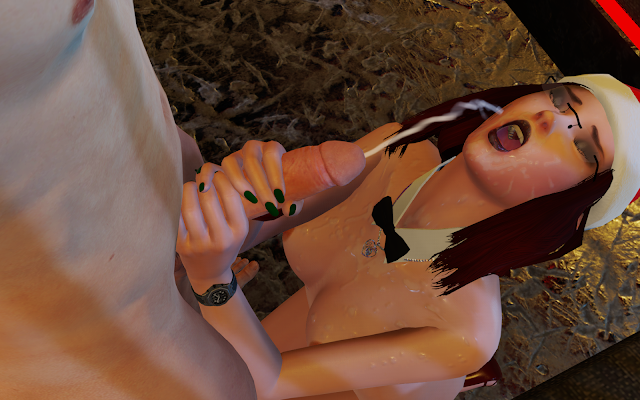 And with that, all that was left was to give him a rather sticky peck on the cheek as a show of gratitude and to get dressed to see in the new year which was now just a few minutes away. 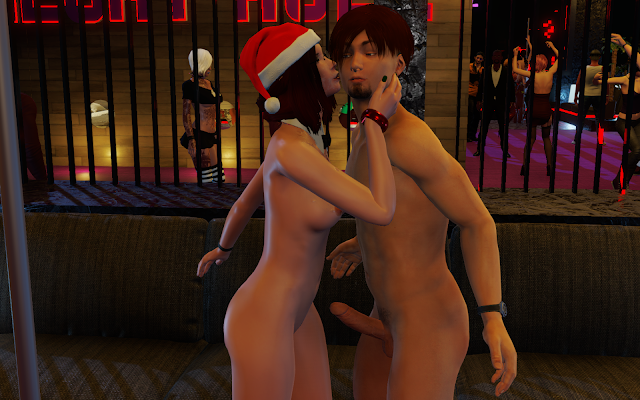