How it started vs how its going... kinda

I keep seeing these posts popping up all over social media where someone posts a pair of pictures; one that is old and from the early days of some something and then one that is fairly contemporary and highlights how things have changed over the intervening years.

When I was looking back at some pics that I took on Amanda's birthday, it struck me that this one of us having a little hug in front of a stylised oil painting I had commissioned of us a few years ago actually did a very similar thing.

I don't remember exactly when I got the painting done. Perhaps early 2018? In which case it would be a little over 3 years old. So not exactly taken at the start of our friendship, which would be another 2 or so years before that. But, nevertheless, its still a nice way to see how things have changed over the years.

It's funny how all the way back then it was Amanda with short hair and me with it long, which is the complete opposite to how things are now with me having hacked mine short and Amanda having let her's grow out. Amanda is also distinctly ink-free back then. Must have been before she let PandaHThomas spend his pocket money on a tattoo gun that he doodles on her with while she sleeps.

If I can be bothered, maybe I'll dig through all my really old photos and do a proper one of these posts to show how I've changed in the almost 6 years that I've been taking them. It probably wouldn't show that much difference actually. The hair has changed but not a lot else. I very much like to stick with what I know and love. 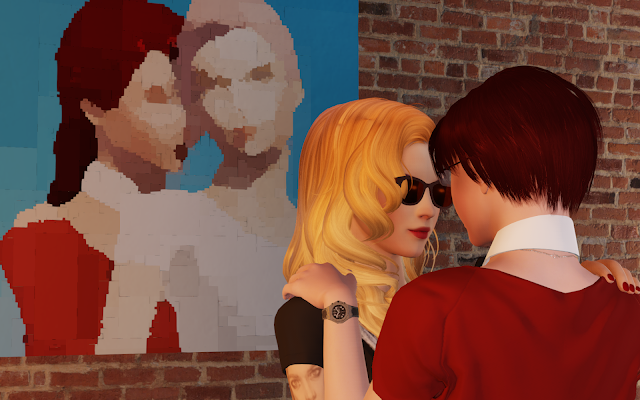