From time to time, I feel like we are all guilty of letting our horniness get the better of us and yesterday it was my turn to fall foul of that.

OK, OK, I'll admit it. I was totally gagging for some cock and was hoping that I might get enough interest from the guys that I could find a suitable partner to satisfy my needs. 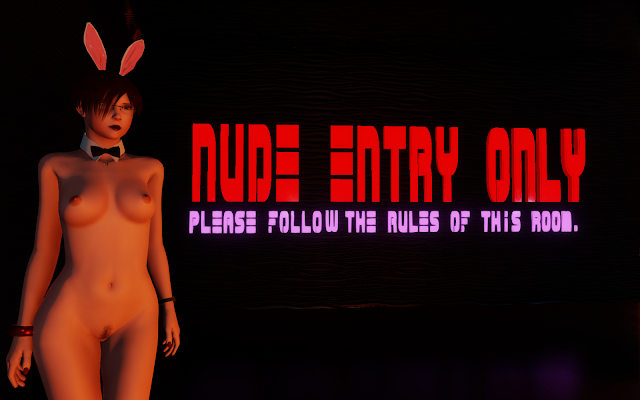 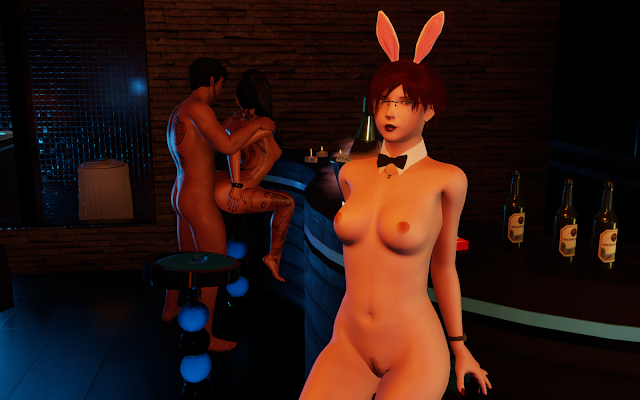 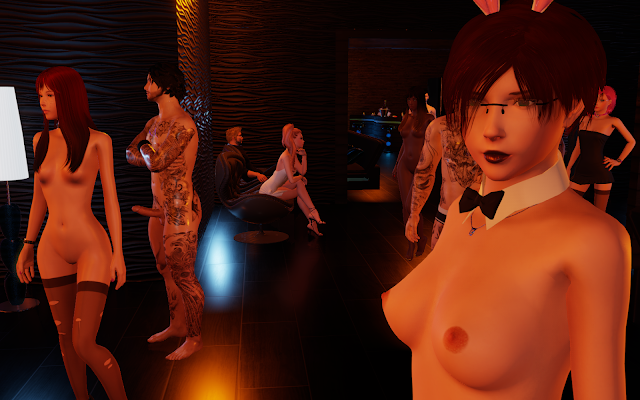 Strolling around the floor, only heightened my horniness. All these amazing sexy bodies to look at. Some of them content to casually watch others. Some of them engaging in passionate or lustful love-making. And some of them clearly eager to get involved but waiting an approach from a willing partner. All of them turning me on even more as I looked them up and down.
Thankfully, I was getting quite a bit of interest myself as a bunch of guys hit on me. I had a nice little selection to pick from but there was one that caught my eye and stood out from the rest. I think he was very pleased indeed when I agreed to spend some time with him and off we went to find a spot to get down to business. Easier said than done, if truth be told, as the place was absolutely packed out.
It took a bit of mooching around but we found a spot. Unfortunately, it was off in a bit of a side room, so we were somewhat away from the naked hustle and bustle. But, nevertheless, we made ourselves comfy.
He lay down on the couch and I straddled him. I could feel his cock getting hard between my buttcheeks. I teasingly rubbed up and down it to give it a helping hand.
As it grew bigger, I raised myself up slightly to let it poke underneath me and between my legs. Then, lowering myself again, I sat on his shaft. My pussy lips softly wrapped around the upper side of his dick as I gently start to grind my hips, rubbing my pussy up and down his length. It was rock hard and throbbing in no time at all. 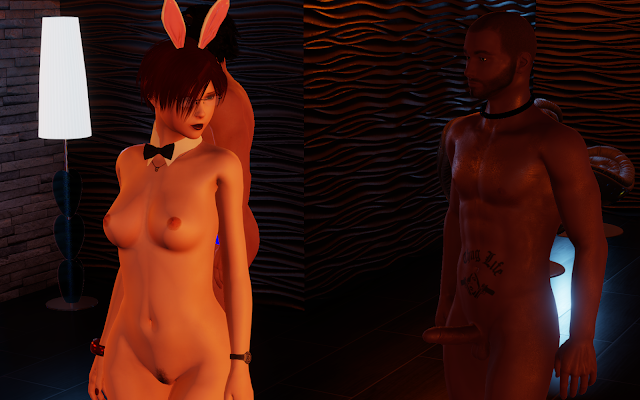 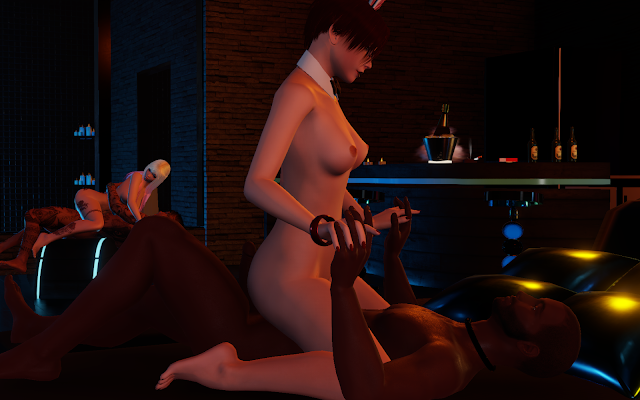 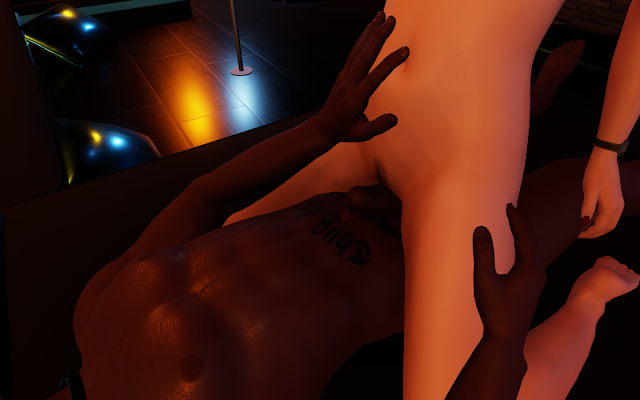 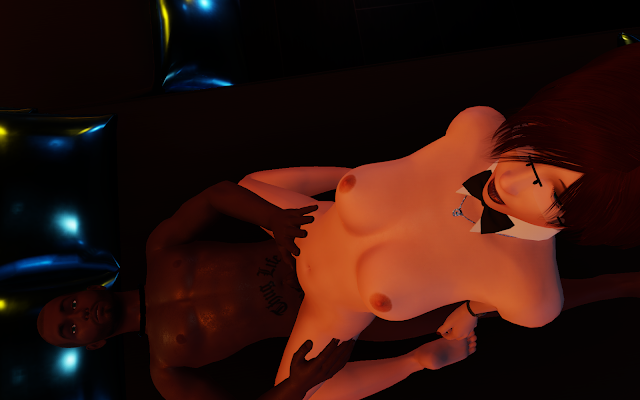 With his cock now properly stimulated, I go go to town on it with my mouth. Stroking his shaft with one hand, I pressed my lips down around the tip of cock forming a tight seal.
I sucked and I sucked on the head of his dick but he wanted more. A hand on the back of my head encouraged my to take more. His hand would press my head down and then let me come back again, each time taking a little bit more of his cock until I was swallowing the majority of it. My tongue teased the underside of it every time I took him in my mouth. 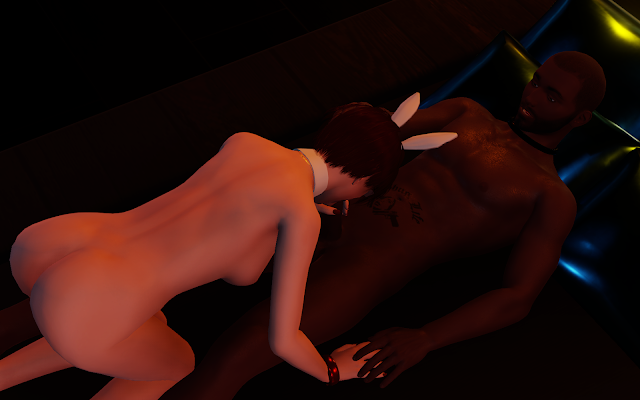 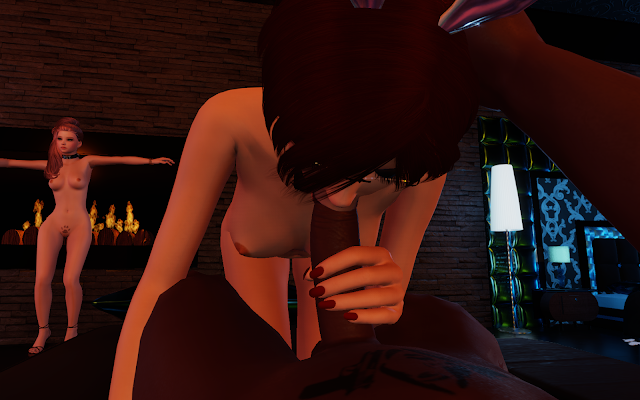 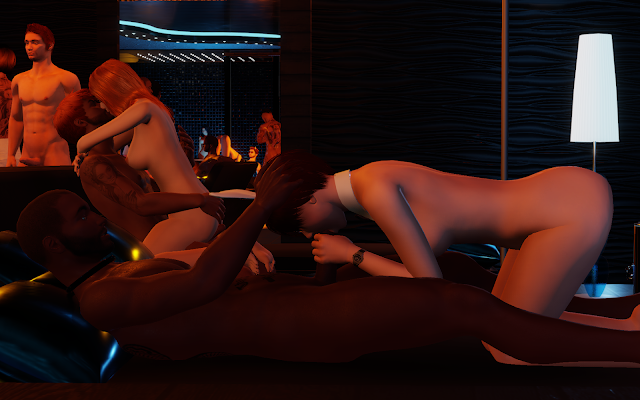 Now, I make no secret of the fact that I love giving blowjobs. I would go so far as to say that it is my speciality. So I would have been more than happy to continue sucking him him. But I got the distinct impression that he was eager to start progressing our little encounter.
I suggested to him that we move things along. It seems we were on very different wavelengths though. I was thinking perhaps I could turn myself round and park my pussy in his face while I was devouring his cock. A nice bit of 69 to get my pussy ready for what would surely come next.
He had a very different idea though. Manhandling me into position so that he was now behind me, I felt the head of his cock try to force its way between my pussy lips and deep inside me. I let out a cry of discomfort. His cock was too much for my tight cunt in its current state. It simply wasn't going willingly to let him in without at least some foreplay to get me wet. 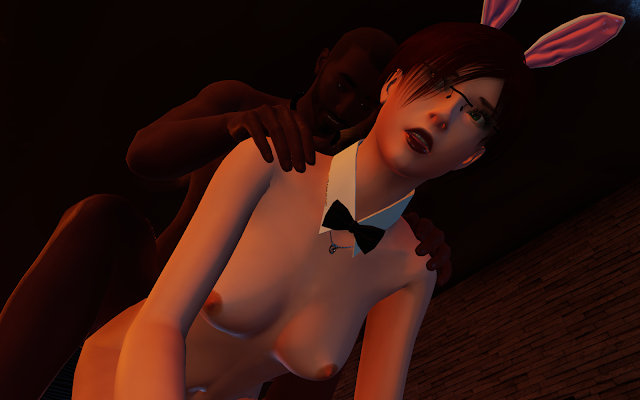 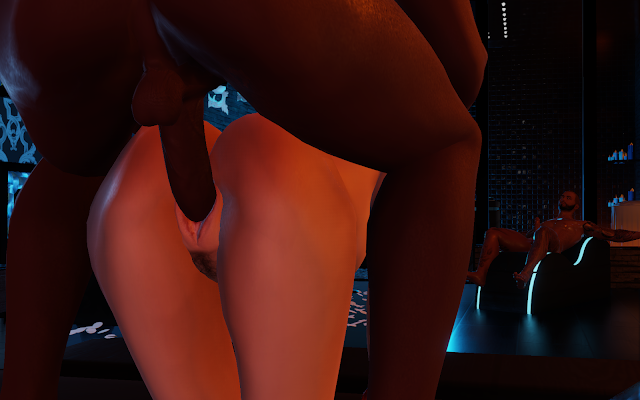 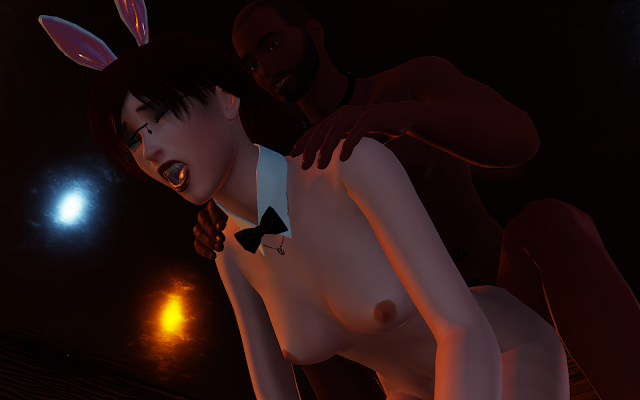 He was very apologetic and wasted no time in trying to remedy the situation. I found myself being flipped over on to my back, as he buried his face between my thighs.
While his tongue eased its way between my pussy lips before probing deeper inside me, his hands busily explored my body. One hand focused on stimulating my clit, his thumb doing most of the work. And his other hand moved across my tummy and chest, caressing my tits and cheekily pinching my nipples. It felt like heaven. I implored him to keeping going.
I'm sure he would have been getting a nice taste of my pussy juices by now as I could feel my cunt getting wetter and wetter. It wouldn't be long at all until I'd be ready to receive the fucking that I had come here looking for. 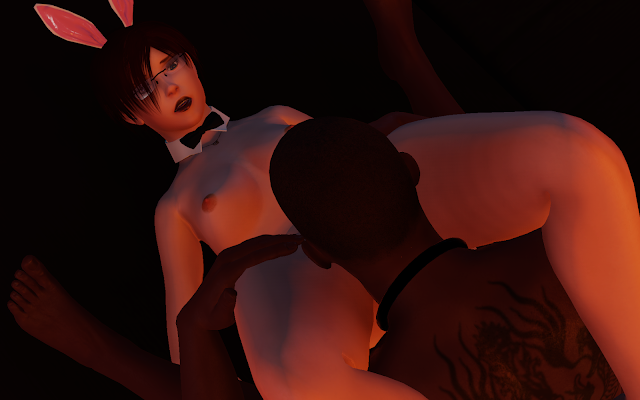 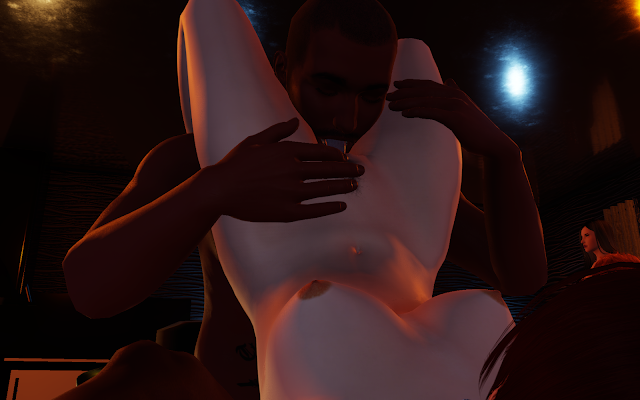 With my partner busy taking care of eating me out, I couldn't help but look around to see what other sexy shenanigans were going on around us. So many naked bodies playing with each other, in every corner of the room. It was thrilling to be one of them.
And them I noticed something quite interesting. Just across from us, I saw a guy watching us very intently. Very intently indeed. He was definitely what he saw as he was rock hard. But there was something about him that I just couldn't shake. Then, as I squinted harder, I realised I recognised his face from a threesome I had many years ago. It was so long ago, that I very well may have been the first sexcapades of mine that I ever blogged about. It was definitely him though; I never forget a face!
Of course, squinting so hard to see his face, that there was nothing subtle about. It took a while but that finally dawned on me as our eyes looked. Curiosity grew in me; was he watching us because he also remembered me or was it just pure chance?
Regardless, watching him watch me was turning me on even more. My pussy was now well and truly wet and more than ready for some cock. Attempt number two by my partner to fuck me from behind went much better than the first. This time my pussy was much more compliant allowed his throbbing cock to slide right in.
And it just so happened that I was now facing directly towards my admirer. I watched him stroke his cock while another man had his cock balls deep inside me. What a thrill! 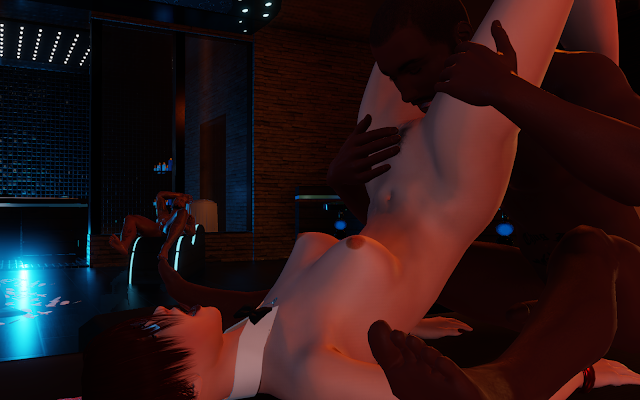 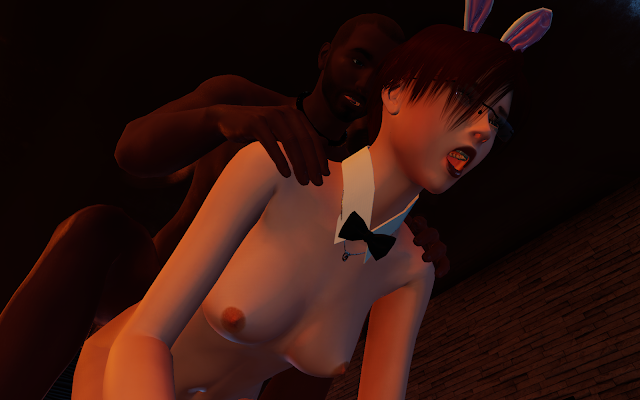 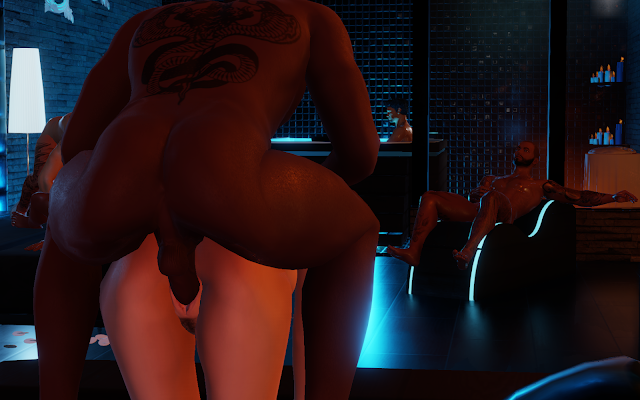 Despite my juicy cunt's willingness to accept the full length of dick, my partner started off tentatively. Taking it slow and steady to make sure he didn't get anymore unpleasant surprises due to me letting out howls of pain, I expect.
His fat cock squelched in and out of my sopping pussy as he got more and more rough with me, completely unaware that I was eye fucking someone else at the same time. Part of me hoped that our watcher would come over and join us. Don't get me wrong, I was really enjoying the one cock I already had inside me, but two of them at the same time? That could be a real treat. 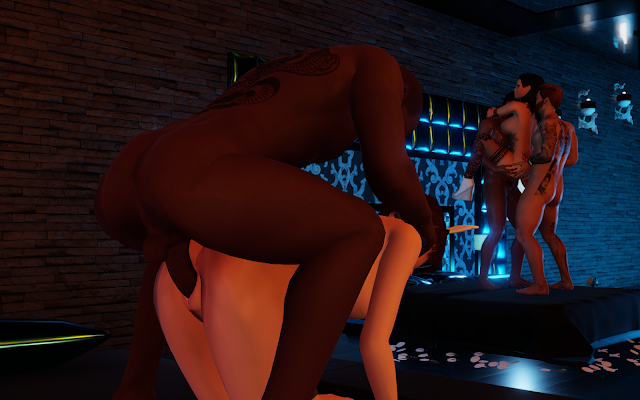 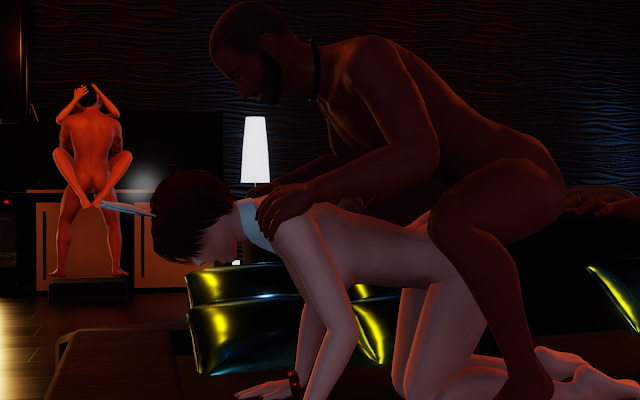 Still getting pounded from behind, I struggled to stay up on all fours as things got rougher. I toppled forward, face planting into the couch. My moans and groans, which had steadily been increasing in frequency and volume, now muffled in the fabric of the couch.
My hands, now liberated from supporting me, started touching my sensitive areas. My clit and nipples getting the attention they deserved. Not easy to do while getting ploughed into a couch, Especially when each thrust into me felt like it would push towards and, ultimately off, the edge of the couch. I was bracing myself as best I could whilst also trying to touch myself.
On the occasions that I could wriggle my head up to look around, I could see that we were still being watched. Our viewer steadily beating his cock as we fucked like filthy animals in front of him 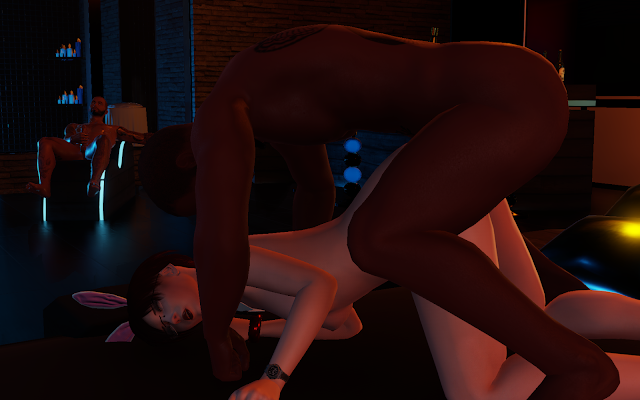 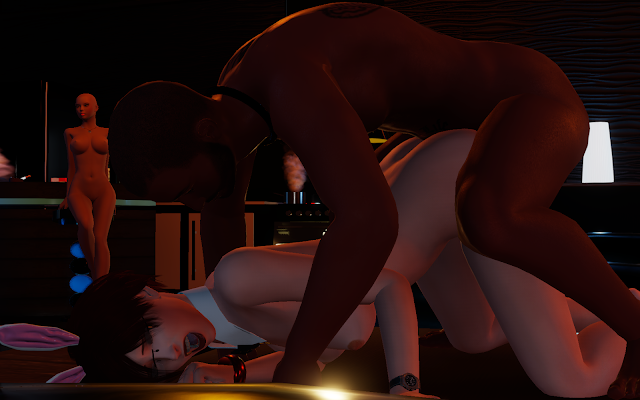 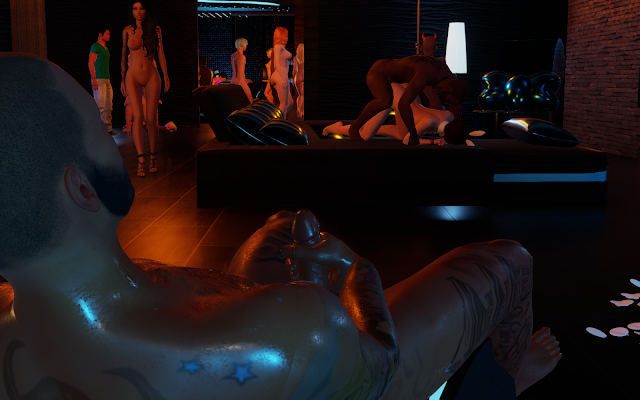 My face going numb from being driven in to the couch, I struggled and squirmed to try to make myself more comfortable but it just wasn't happening. Eventually, I had to stop my partner and ask if we could change things up to a new position that did involve me being smothered in the couch.
Lying down on my back, I spread my legs and invited his cock back in to me. As he penetrated me once more, I raised my butt up as much as I could muster to enter the angle he was entering me at to try to help him hit that spot that really gets me off. It worked a treat as his dick was making me feel so good. It felt like it wouldn't be long until I came.
To help me get there as quickly as possible, I asked him to stimulate my clit with his fingers while both of my hands were occupied with my tits. I squeezed them and massaged them. I rolled my nipples between my fingers and thumbs.
I'm sure that everyone around us was well aware of how good this all felt as I made no attempts to keep quiet. Whereas, I had earlier cried out in discomfort, now I cried out in pleasure. 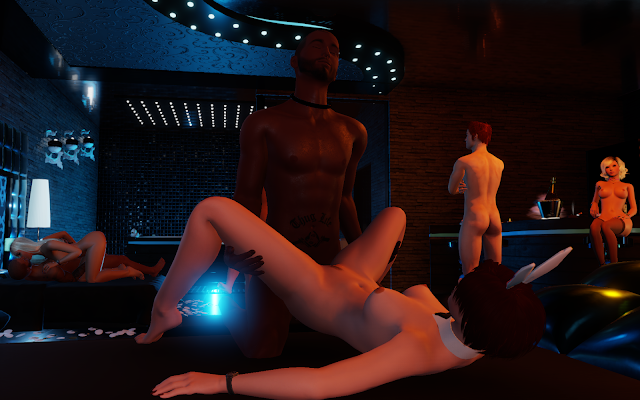 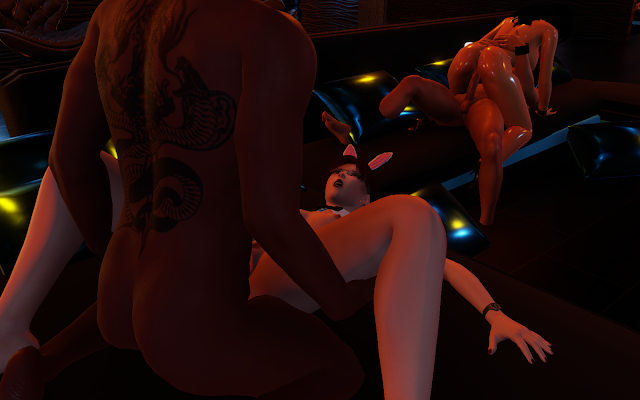 And as I felt a climax building within me, I felt something else in me as well. An eruption of hot cum filling my pussy. As he slowly withdrew his cock from my cream-filled cunt, his seed oozed out onto the couch.
After a few moments of catching our breathes, he glanced at his watch. A panicked look spread across his face. We had been so consumed by our fuck session that we had both completely lost track of the time and he was now on the verge of being late for work if he didn't leave immediately. He was very apologetic for needing to rush off but I thanked him for the fun we'd had together and then sent him on his way. Despite the slightly abrupt ending, I had been more than satisfied with my evening. 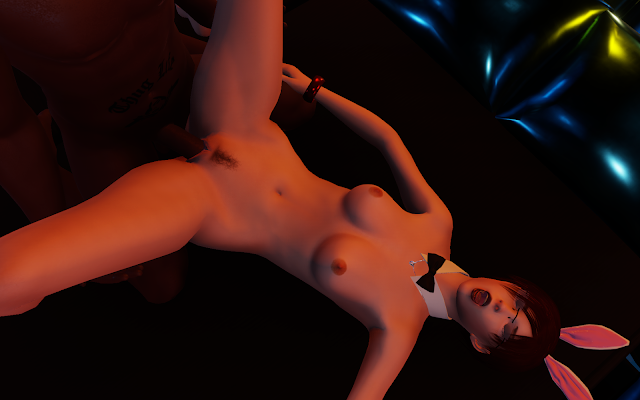 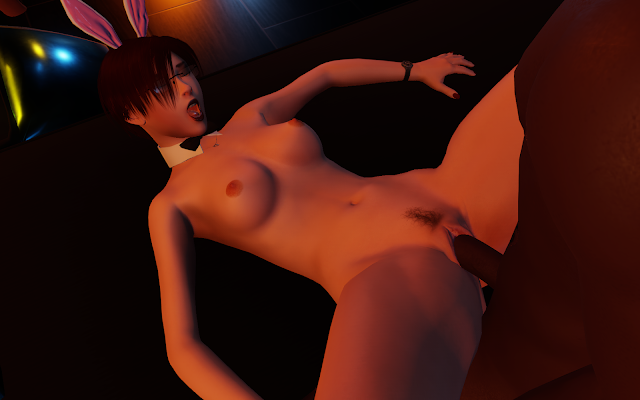